American Dreams is a Stranger Mission in Red Dead Redemption 2 (RDR2). Stranger Missions are the equivalent of Side Quests, and they unlock as you progress the Story Missions.

Under the train tracks facing towards Valentine, there are words "LOOK ON MY WORKS" on the rocks. The handing corpse is missing a head.

Southwest of Wallace Station in West Elizabeth, there are words "DO YOU SEE? on the boulder next to the corpse.

South of Scarlett Meadows and east of Braithwaite Manor, the word "BEHOLD" is on the tree right of the corpse.

This stranger mission is available during nighttime. After finding all the three Murder Scenes, head  southwest of Valentine to Lucky's Cabin and open the basement door. Inside, make sure to inspect everything for collectibles and then inspect the knife. After the cutscene, knock out and tie the serial killer, then take him to the sheriff in Valentine.

As the sheriff takes the serial killer (Edmund Lowry Jr.) to his cell, he attacks the sheriff. Use Dead Eye and kill him. If you are too slow, the sheriff will take care of the criminal and you will not be rewarded with the $20. 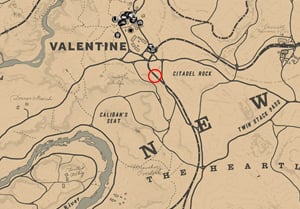 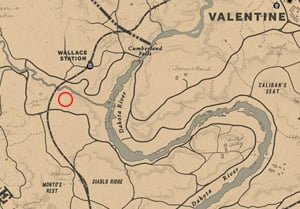 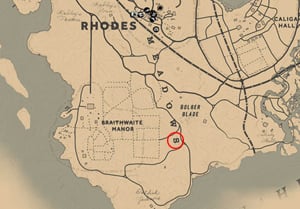