Dead-Eye in Red Dead Redemption 2 is a combat mechanic that gives Arthur Morgan an edge in a gunfight.

How Does It Work?

Dead-Eye can be triggered while aiming a gun by pressing down on R3/RS. This will paint a sepia tone over the screen, slowing down time, and allowing the player to take their targets out before they can even react. Through progression, new levels of Dead-Eye can be unlocked, which grant new features to the already existing ones. To avoid playing through the entire game in a slow motion, Dead-Eye has a meter which is consumed upon activation: the longer it stays on, the more it depletes. 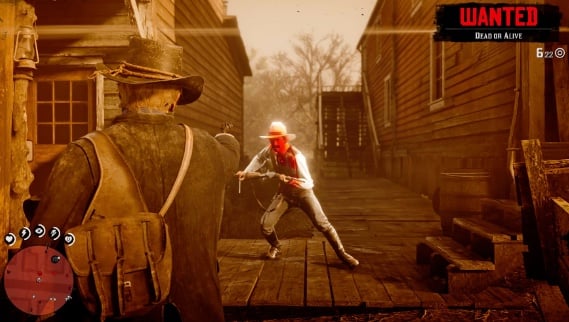 There are a total of three levels of Dead-Eye:

Activating Dead-Eye will deplete the Dead-Eye Meter, that over time replenishes itself. However, there are consumables and tonics that can manipulate the depletion and replenishment rates, and completely replenish it for dire situations. Here are a list of consumables and items that affect Dead-Eye in some capacity:

Dead-Eye can also be used when hunting to track down prey, even after they're been injured. It is triggered in the same way and animals give a line trail across the screen, that acts like their scent, that can only be tracked in Dead-Eye Mode.