Hunting in Red Dead Redemption 2 (RDR2) is an activity which involves killing wildlife, and can be performed as a means of survival, or simply for sport. Players will obtain a special Stranger Mission to hunt down Legendary Animals. You might also be interested in Fishing and Legendary Fish.

Hunting is another feature in Red Dead Redemption 2 that has received an overhaul. While the basic concept is the same -tracking a specific animal and killing them- the methods of each step have been altered drastically, to give players the chance to choose the most appropriate for each situation. Since RDR2 has put a larger emphasis on survival than its predecessor, learning to hunt can give players a big boost as it not only provides food but materials for crafting clothing, and even a source of income.

See the Wildlife page for all 200 species in the Ecosystem

In the original game, players only had 1 type of bait that could be bought in most General Stores or looted. In RDR2, it's been confirmed that players will need to make use of different bait and lure, to attract different prey. This suggests that more variations of bait will be added or even possibly, players will be able to use animal carcasses of smaller animals to lure out their natural predators.

Red Dead Redemption 2 introduces a new way of tracking prey via the new "Hunting Ability". When  toggled, it appears to reveal a trail of a wounded animal in the even that may have been hit but not completely put down. 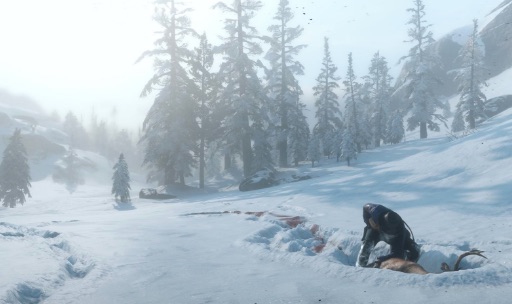 Once the player identifies their prey, the new features kick in, and hunting becomes less "kill on sight" and more strategic. Previously, getting to close to passive animals would startle them and send them running. While this still holds true, wildlife can now smell the player from further out of this alert radius, if the player is upwind in relation to the animal.

Once the player has sorted out their position to hunt, they need to turn to their weapons. Selecting the appropriate hunting tool for a species, and/or purpose of hunting is vital, as the weapon and process can change the value of the kill. For best results, players need to ensure the caliber of rifle used is strong enough to kill the size of animal, and target vital organs/body parts. This reduces the amount of ammunition that literally goes into killing a particular animal, which further decreases the value of the carcass with every additional bullet used. So unless a hunt is solely for sport, stray from using Shotguns. Using a Bow will preserve the quality of the carcass, and if aimed properly, can be lethal even from long distances. 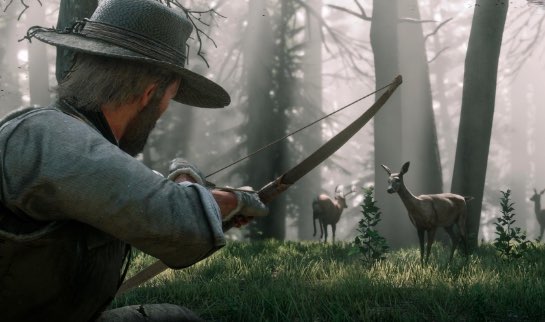 Once the prey is dead, it will appear on the on the mini map as an "x". Be sure to either pick it up or, harvest it there on the spot quickly, as scavengers will show up shortly after looking to claim your kill. Players can place the entire animal carcass on their horse and bring it back to either the Van Der Linde Camp to feed your fellow bandits, or a General Store to sell it. Once again, the quality and valuation of each carcass will vary depending on the species of animal and the method of the kill. 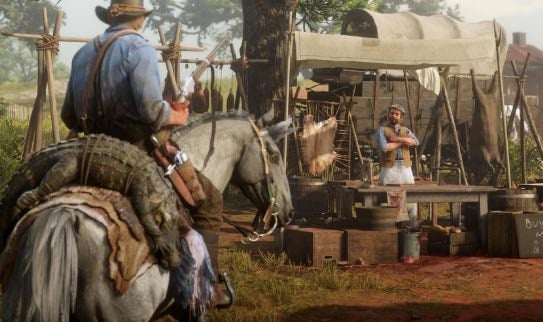 Most of what is said about hunting can be applied to fishing; locating the different beds of water your target prey may reside in, using the appropriate bait and hunting tool (Fishing Rod) to catch them, and using the materials/meats they provide to craft/use as food or sell for a profit. 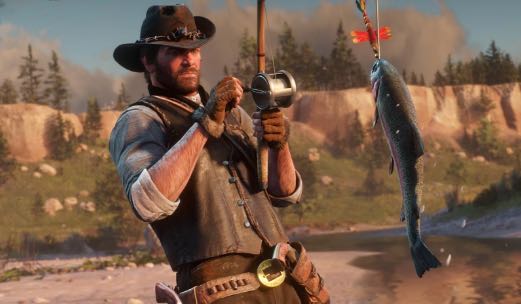 See the Wildlife page for all 200 species in the Ecosystem

There are five different Hunting Requests in total, but you can only accept one request at a time.

While you can find your first Hunting Request at Valentine Station, there are in total six different locations that the posters can be found. These locations are as follows: